Tickets for the #Australian #Tennis Open is NOW available!!

or in our Mobile App www.letsgogo.mobi 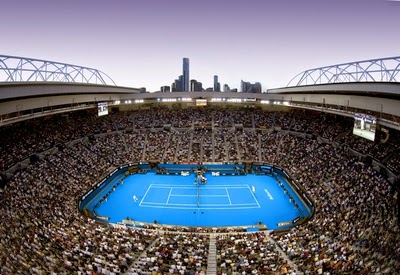 The Australian Open is a major tennis tournament held annually over the last fortnight of January in Melbourne, Australia. First held in 1905, the tournament is chronologically the first of the four Grand Slam tennis events of the year – the other three being the French Open, Wimbledon, and the US Open. It features men's and women's singles; men's, women's, and mixed doubles and junior's championships; as well as wheelchair, legends and exhibition events. Prior to 1988 the tournament had been played on grass. Since 1988 two types of hard court surfaces have been used at Melbourne Park – green Rebound Ace to 2007 and blue Plexicushion from 2008.[2]

The Australian Open typically has very high attendance, second only to the US Open. It was also the first Grand Slam tournament to feature indoor play during wet weather or extreme heat with its two primary courts, the Rod Laver Arena and Hisense Arena, equipped with retractable roofs.

HISTORY
The Australian Open is managed by Tennis Australia, formerly the Lawn Tennis Association of Australia (LTAA), and was first played at the Warehouseman's Cricket Ground in Melbourne in 1905. This facility is now known as the Albert Reserve Tennis Centre.[3]