So that’s it. After a thrilling and tenacious drive, Lewis Hamilton has his first win of the season and will be looking to build on this victory at the Canadian Grand Prix (10-12 June). Poor Daniel Ricciardo, undone by poor pit-stop strategy in Barcelona, is once again the victim of abject incompetence by Red Bull, and the inquest into that fluffed tyre change will surely rage long and hard. 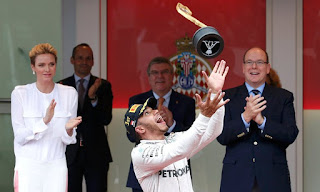